For the international mobility of artists

The RES.Ò project started out as a training initiative promoted by the main Piedmontese institutions operating in the sector. The aim was to create a permanent platform of high-quality residencies for the mobility of national and foreign artists: both inbound (from abroad to Piedmont) and outbound (from Piedmont abroad).

Launched in 2010, it was the first project in Italy to involve a network of local cultural institutions in the experience of residencies for young artists. The residencies made available to the artists represented a moment of training and comparison for the artists themselves, as they were linked to direct experiences in the host territory.

RES.Ò began under the aegis and in the sense of sharing, as expressed by the words reseau (French for ‘network’) and reso (Italian for ‘rendered’), insofar as the artist residency is not only about the presence of the artist in a specific context, but a formative moment and one of interchange between subjects and places. It is the opportunity for relationships, visions and values to be created, intensified and established.

For this project, the Foundation encouraged the participation of the main Piedmontese contemporary art institutions dedicated to training, seeking the overlapping of urban and multicultural territories abroad, such as Cairo, New Delhi, Rio de Janeiro, Cali and Biruchiy, in order to foster a geography of art viewed as social activation through the training of young artists.

From 2012 to 2013, RES.Ò was supported by Meet Up, a project for the training of artists on the local territory, consisting of a seven-month period of tutoring (with studio visits, laboratories, public presentations, workshops, etc.) to encourage spontaneous forms of self-training, to strengthen production, and ensure continuity in the visibility of research work.

In 2013, RES.Ò Lab, a three-week ‘in-and-out’ residency project aimed at fostering access to new interesting realities and allowing direct contact with the territory through meetings and visits related to each individual research project, was added to the educational offer. Since 2014, thanks to the curatorship of Massimo Melotti, RES.Ò Lab has promoted exchanges with international partners such as the Biruchiy Contemporary Art Project (Ukraine), joined in 2017 through collaboration with the CAIRN Art Centre (France).

Throughout its years of activity, RES.Ò achieved such an excellent accreditation in the world of international residencies that it attracted the attention of new residencies such as Artport in Tel Aviv, Israel, and CCAS in Canberra, Australia, with whom a reciprocal collaboration project was activated for the 2016 edition.

Each edition involved an exchange between Piedmontese and international artists for a period of six weeks in each of the chosen residencies. The artists were selected by a commission made up of the institutions involved and the foreign residency directors. During the residencies, the artist participated in meetings, seminars, workshops and studio visits in direct connection with the residency and workshop experiences already undertaken by the various actors in the contemporary art system in Piedmont.

The project, which came to an end in 2017, drew on the overall participation of 44 artists from Piedmont and around the world.

Among the most significant exhibitions and events in which RES.Ò residents participated, we might mention two winners of the Premio Illy (Dina Danish and Fatma Bucak), a participant who later became Director of the Brazilian residency (Amilcar Packer), as well as the involvement of most of the artists in group and solo exhibitions in leading museums in Italy and abroad.

Over the course of its years of activity, RES.Ò attracted the participation of numerous institutions and artists, as well as the implementation of a number of special projects.

o   Let’s Talk RES.Ò @ Artissima ­– during the contemporary art weekend, as part of Artissima, the RES.Ò talks were an opportunity to discuss the relationship between research and residency in the presence of the edition artists’ presence.

o   The Box – inspired by the Duchamp Museum in a suitcase and the Time Capsule designed by Andy Warhol between 1974 and 1987, the RES.Ò travel box is a true Fluxus-kit, an archive of memories that presents itself like a simple cardboard box containing art objects and multiples. Thanks to the instruction booklet, it turns into a DIY – Do It Yourself travelling exhibition, set up several times in different contexts. Not conditioned by production but invited to study and research within a new geographical horizon with other methods and practices, the artists design an object-document that recounts the residency experiences. That, year after year, went to compose the travel box.

o   Working Geographies – Res.ò International Art Exchange Residency Program (Mousse Publishing) is the publication that summarizes the first five editions of the RES.Ò project. It was presented with the sixth edition of the project at the Circolo dei Lettori in Turin, at NABA Milan, in Bologna, in Matera European Capital of Culture and Bergamo. 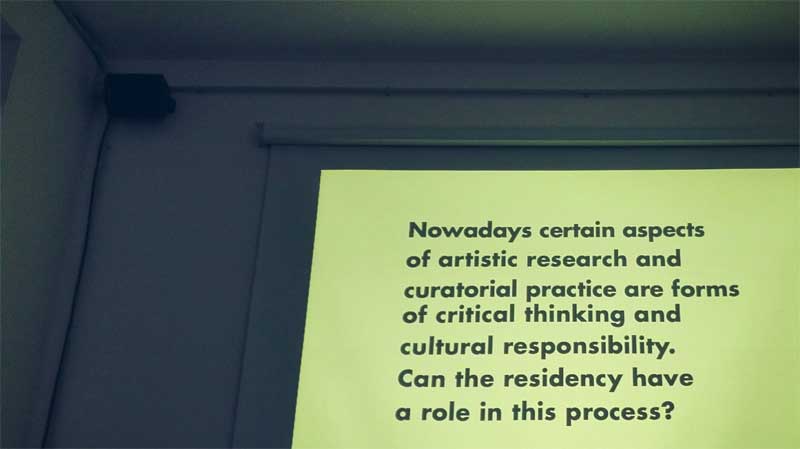 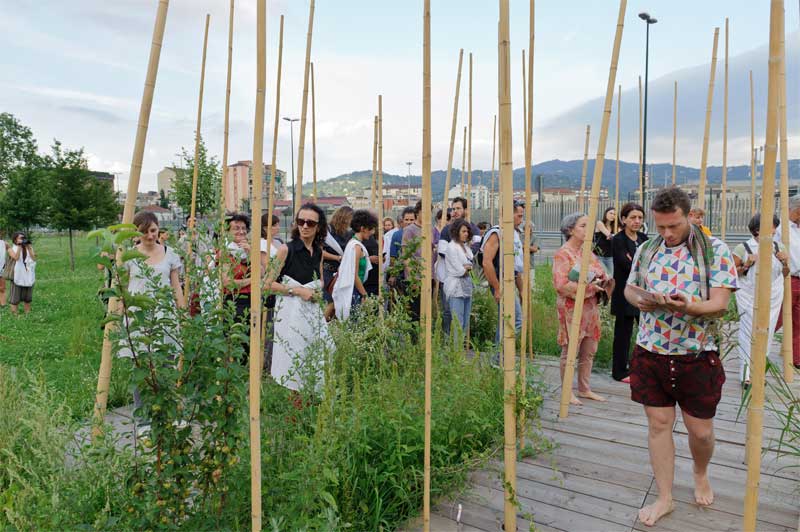 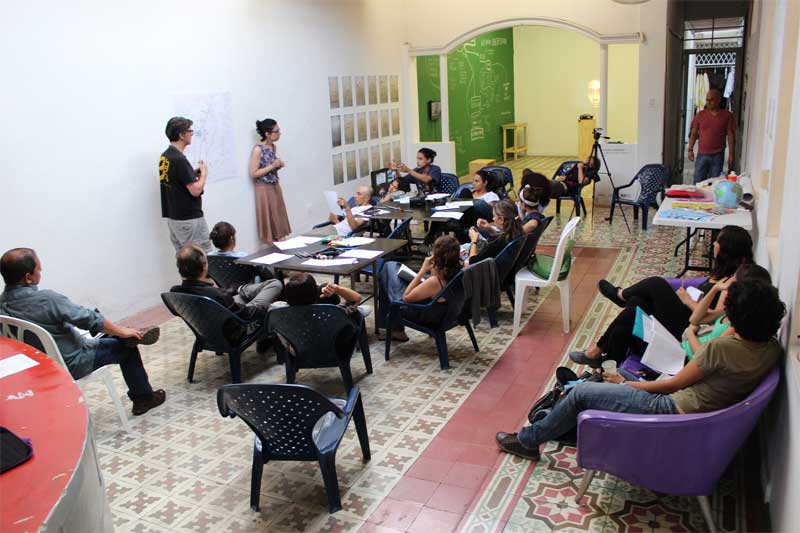 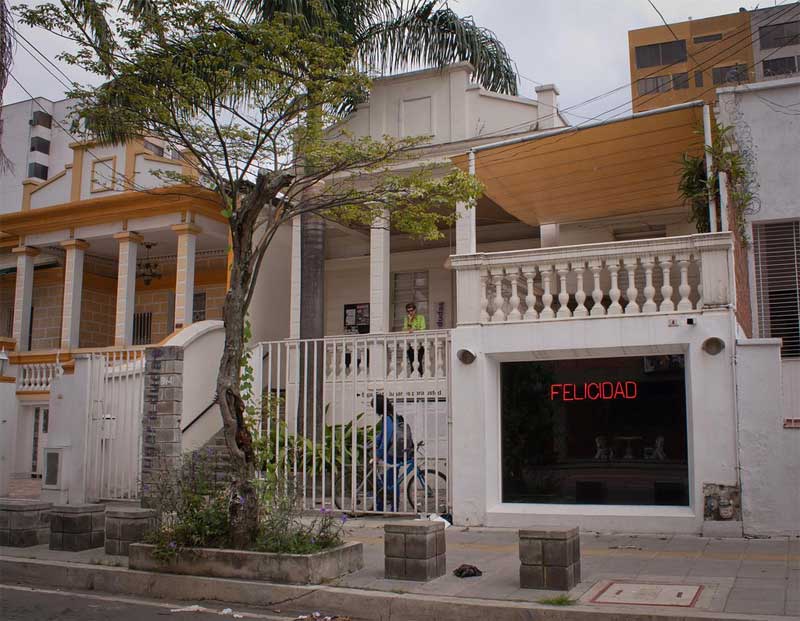 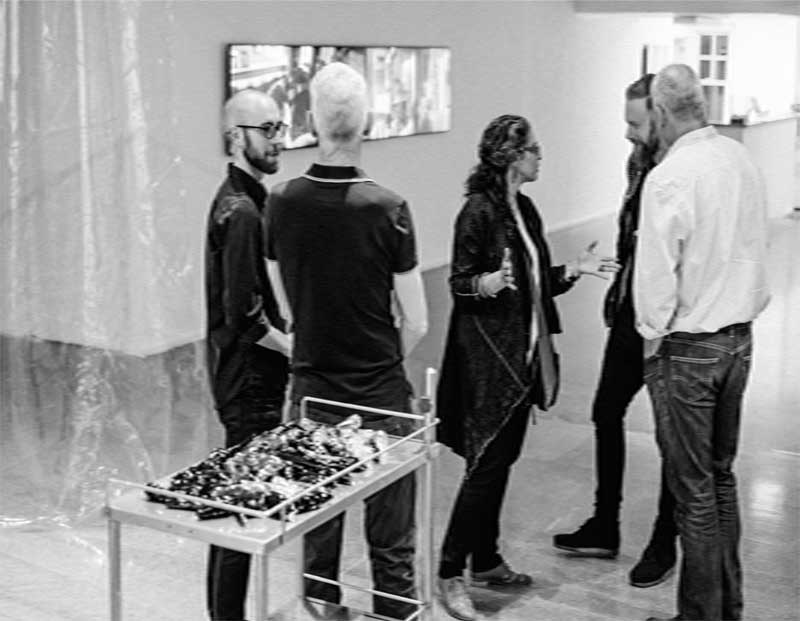 Federica Peyrolo guest of Lugar a Dudas in Cali, Colombia.

Marianna Orlotti guest of Lugar a Dudas in Cali, Colombia.

The 2015 Edition saw the birth of the Working Geographies – Res.ò International Art Exchange Residency Program. The first four editions of the residency program are documented within the volume, containing the authors’ texts and the artists’ projects so far.

Giorgio Cugno guest of Lugar in Dudas, Cali (Colombia), over the summer.

Introduced in the 2013-14 Edition, the RES.Ò – Lab project, carried out in collaboration with the Ukrainian residence of Biruchiy Contemporary Art Project, featured artists Vitalii Kokhan and Ivan Svitlychnyi with curator Sergey Kantsedal. The declination of the program was designed to offer artists continuous opportunities to get to know and come into contact with heterogeneous cultural fields.

For the first edition of RES.Ò, the subjects of the system promoting the initiative have chosen the Fondazione Pistoletto-Cittadellarte, Fondazione Spinola Banna per l’Arte e PAV Parco Arte Vivente for Piedmont, and e Townhouse Gallery in Cairo e Capacete in Rio de Janeiro, for foreign countries. The residences, which in subsequent editions will be assigned in rotation the other subjects in the territory, aim to produce works of art, with different methods and paths, in a new horizon of meaning that reflects on the current definitions of knowledge and the practices of knowing and doing.

During the out-going residences, lasting 6-9 weeks each, the artists selected by the RES.Ò commission worked on foreign platforms interacting with the cultural fabric of animated and transforming neighbourhoods, building solid relationships at local and international level. As part of their stay, through meetings with curators and experts, the artists could develop interdisciplinary ideas and practices.

The Italian artists selected to participate in the first edition were Alessandro Quaranta, Paola Anzichè, and the duo Francesca Macrì e Irene Pittatore. On the other hand, the international artists were Magdi Mostafa from Cairo,  Dina Danish also from Egypt, Amilcar Packer from Brazil.

go back
Meet Up