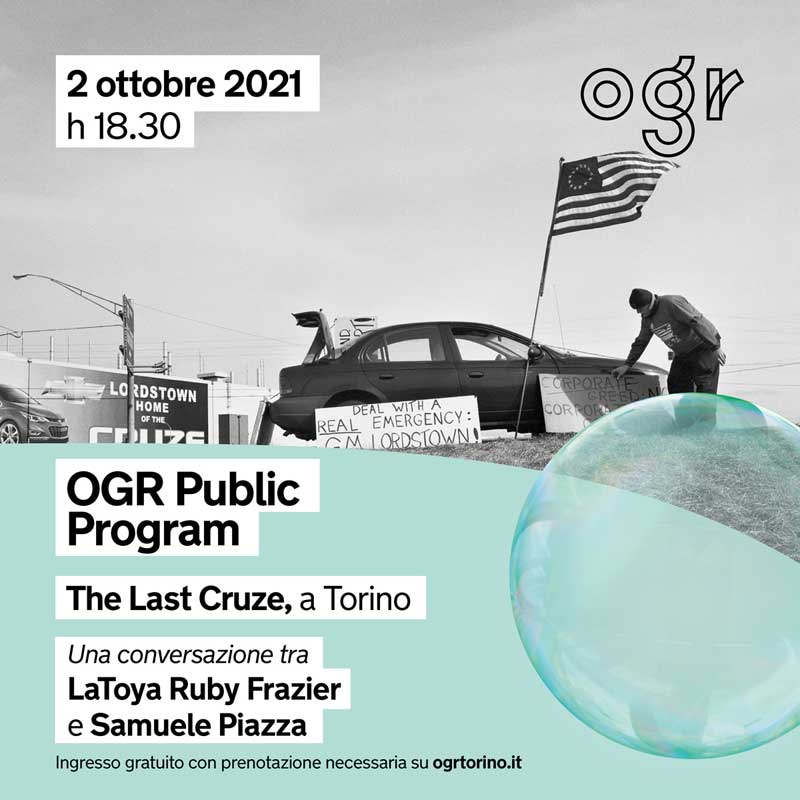 A conversation between LaToya Ruby Frazier and Samuele Piazza

The Last Cruze, a body of work by artist LaToya Ruby Frazier, centers on the workers at the General Motors plant in Lordstown, Ohio. After more than fifty years of automobile production and a commitment to manufacturing the Chevrolet Cruze until 2021, the facility was “unallocated” by GM. This came as the company shifted more production overseas and directed more resources toward electric and autonomous vehicles. Employees in Lordstown have therefore been faced with the difficult decision to voluntarily or involuntarily transfer to plants located in other parts of the country. For many, this meant uprooting or dividing their family, moving away from ageing parents, or leaving behind their support networks and all they’ve ever known. Those who turned down the transfer were cut off from the company, losing their pensions and benefits.

During a period of great uncertainty and change – as UAW International union negotiated with the Big Three automakers: GM, Ford and Fiat Chrysler – Frazier was in Lordstown with the workers and their families, recording their stories. Through images and interviews, Frazier conveys their experiences of the quickly developing events, the intense disruption to their lives and their community, and the strong efforts of the local union, UAW Local 1112, on their behalf.
The Last Cruze features over sixty photographs and other elements, presented within an installation that visually echoes the assembly line in the GM Lordstown complex. Part of this body of work, currently on view at OGR Torino in Turin within the Vogliamo tutto exhibition, will be the starting point for a conversation between the artist and the curator of the show, Samuele Piazza. Looking at some of the common dynamics in global neoliberism, the conversation will use the lens of artistic practice to look at the social and economical shifts happening in the Rust Belt, and their multiple links to the post-industrial transition of Turin.

LaToya Ruby Frazier was born in 1982 in Braddock, Pennsylvania. Her artistic practice spans a range of media, including photography, video, performance, installation art and books, and centers on the nexus of social justice, cultural change, and commentary on the American experience. In various interconnected bodies of work, Frazier uses collaborative storytelling with the people who appear in her artwork to address topics of industrialism, Rust Belt revitalization, environmental justice, access to healthcare, access to clean water, Workers’ Rights, Human Rights, family, and communal history. This builds on her commitment to the legacy of 1930s social documentary work and 1960s and ’70s conceptual photography that address urgent social and political issues of everyday life. Frazier’s work has been the subject of numerous solo exhibitions at institutions in the United States and Europe, including the Brooklyn Museum of Art; Seattle Art Museum; The Institute of Contemporary Art in Boston; Contemporary Art Museum, Houston; Musée des Arts Contemporains, Grand-Hornu, Belgium; CAPC Musée d’Art Contemporain de Bordeaux, France; Carré d’Art – musée d’art contemporain de Nîmes, France.

At OGR Torino he has curated solo shows by prominent contemporary artists such as Mike Nelson and Monica Bonvicini. He founded and co-curated the experimental series Dancing is what we make of falling, an exhibition format mixing video screenings, talks and performances.
He previously co-curated On Limits. Estrangement in the Everyday at The Kitchen, New York, as 2015 “Helena Rubinstein” Curatorial Fellow at the Whitney Museum Independent Study Program.
He holds an MA in Aesthetics and Art Theory from CRMEP, Center for Research in Modern European Philosophy, Kingston University, London and an MA in Visual Arts from Iuav University, Venice.